So the story so far is that I decided to code an iPhone game on my iPhone, after working out that this was technically feasible and coming up with a concept I had a basic game.


My basic game in fact was very basic - it didn't look very good and it wasn't very playable. At this point I reached out to my friend Fred Mangan who was is an experienced games artist. Okay so I got a bit lucky having Fred as a friend, but for anyone writing their first game I cannot recommend highly enough finding an artist to collaborate with. Fred had a quick play of the game on my phone and got to work on a design. A few weeks later Fred emailed me the following design concept as a PDF. 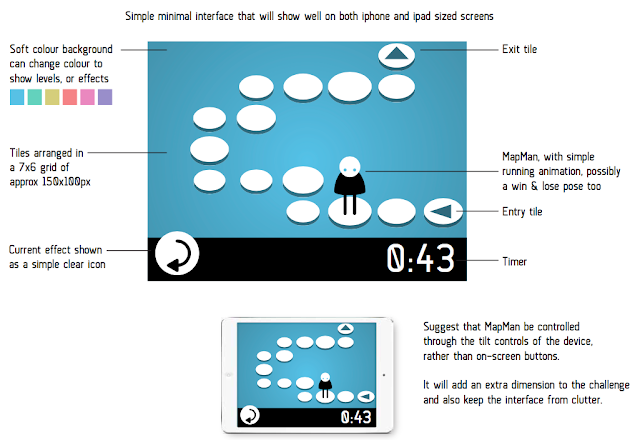 Fred's design was a revelation. All at once I could see the potential of integrating Fred's design with my game engine. Fred also made a key suggestion to change to tilt controls (the initial prototype relied upon the user tapping the screen). I was a little uncomfortable with this change at first because my original Amstrad CPC game had used keyboard controls, however I went with Fred's suggestion trusting his opinion.

Fred also suggested we adopt Slack to make our collaboration easier. This was another great suggestion and really sat well with the idea of coding a game on a phone. I was able to to exchange ideas and receive art work files from Fred using a combination of Slack and DropBox. Pretty soon I had upgraded my prototype to use Fred's initial graphics and things were looking a lot better. 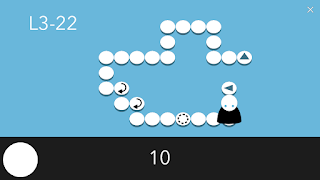 There was still a long way to go - MapMan was a static image with no animation (not even any legs), no music or fx and only very basic menus. I also only had a handful of levels, so lots of work to do. Nonetheless there were enough encouraging signs and every chance got, either standing in a queue or waiting in an airport (or both), I got out my phone and chipped away and creating my game.

The next key milestone was a summer BBQ with some friends which I hijacked for some user feedback, but more on this next time.